On Saturday, January 20, 19-year-old singer and rapper XXXTENTACION posted an Instagram story in which he proposed a collaborative mixtape with Brooklyn rapper and PRO ERA founder Joey Bada$$. Joey subsequently posted a screenshot of X’s story and added: “Let’s go @xxxtentacion.” There is no further indication that the project is in the works as of now. 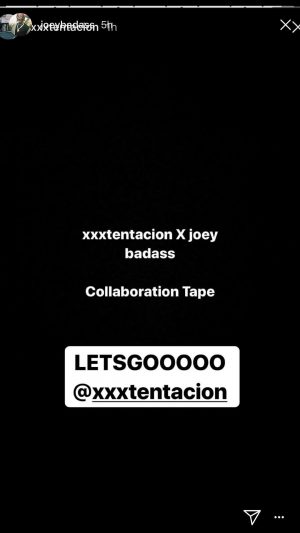 In 2016, X was arrested on charges of domestic abuse against his pregnant girlfriend as well as accusations of witness-tampering. Although his trial was initially scheduled for May 2017, it was delayed until October. On September 8, Pitchfork published the details of the victim’s testimony against X, to which I will return later.

After another delay of the trial until December 2017, X was charged with eight more felony counts of witness-tampering based on recovered phone messages. After spending several days in jail without bail, he was released for two months of house arrest. He will appear in court again on Wednesday, January 24.

I have never had a more difficult time reading an article than I did when I first read the details of the victim’s testimony. The abuse X inflicted upon this woman was evil, disgusting, and, at some points, downright terrifying. Her story depicts a life of constant fear that this hostile and violent man may snap at any moment for no apparent reason. He is a despicable monster who deserves a life sentence in prison, and I cannot fathom why anybody would continue to support his career. If you are a fan of XXXTENTACION, I implore you to read the Pitchfork article and re-evaluate whether or not you want to put money in this man’s wallet.

To say that I am disappointed in Joey is an understatement. Having followed his mixtapes and singles in the build-up to his full-length debut, B4DA$$, I am confident that he is one of the first hip-hop artists I genuinely loved. His follow-up project, All-AmeriKKKan Badass, one of the best hip-hop albums of 2017, solidified Joey as one of the premiere conscious rappers in the mainstream at the remarkably young age of 22 years old.

To see him grow from the fun-loving kid rapping with his friends on “School High” to the mature man lamenting the evils of institutional racism on “TEMPTATION” has been one of the most gratifying experiences of my musical fandom. Pride is not an emotion I frequently feel when I listen to music. When I first spun “LAND OF THE FREE” last year, I felt proud of Joey Bada$$.

Please, Joey. Listen to your fans. Do not collaborate with this terrible human being. You’re better than that.

I am an economics student at The University of Massachusetts Amherst. Beyond my studies, I work as a DJ at the university radio station: 91.1 FM WMUA Amherst. Back in July, a good friend of mine launched a political debate website called The Dialectic, where I currently work as a staff writer and the Editor-In-Chief. I love all genres of music - everything from hip-hop to post-rock to hardcore punk. Aspiring writer. Avid reader. Coffee addict.
Related Articles

This week  Gabby and Madi serves up their rendition of K.P. and Envyi’s classic hit “Swing My Way”, with a 2020 spin by producer justdoitBRISK. The teen duo have been blazing new trails with young audiences, delivering single after single in recent months. Check out their latest, “Swing My Way” here.

Ohio’s Ill NyQuil collaborates with 10cellphones to show the world what it looks like when Ohio and North Carolina come together in their latest single “Night.” Catering to the vibe enthusiasts, “Night” is available on all platforms.

While Dubai is known for its futuristic skyscrapers, exotic pets, homes and most expensive shit from the food to the iced-out vehicles. However, tourist attractions aside, I bet you didn’t know that the hottest spot in the world has a booming new music scene. As every megastar in Hip Hop flocks to Dubai for vacation, they always leave the hotspot with the name of the city’s #1 DJ, Mr. Levier coming out of their word of mouth as the man to know in Dubai. So, who exactly is Mr. Levier?

Born Isaac Jon Ode, Mr. Levier ascended to the top of the Middle East with a staggering DJ set and polarizing persona. Nightly, Levier performance the hottest sets in the nightlife that can be heard instantly throughout the world via word of mouth on social media. His undeniable sets have gained the attention of the biggest names in music visiting Dubai and praised the rising star for providing the soundtrack to best nights of their lives.

Dubai is known worldwide for its extravagant club scene. Dubai is the most populous city in the United Arab Emirates (UAE) and the capital of the Emirate of Dubai. The city’s population is 3.137 million and it’s safe to say that Mr. Levier is in the ear of a large percentage of the young adults with his infectious blends, impeccable perfect-timing and high-profile connections with the biggest stars in today’s music.

Solidified and co-signed, now it’s time for Mr. Levier to take his sound from out of the clubs and onto the charts. Along with the music, Levier’s sound is accompanied by an impeccable fashion sense also crafted by the mind of the style enthusiast. Embodying everything that makes a superstar, Mr. Levier magnetic attraction has generated a legion of fans worldwide, growing by the minute, patiently awaiting the next release.

Stream the new music by Mr. Levier below, courtesy of Mixcloud. And for more on Mr. Levier, follow the breakout star on Instagram and his official website.

Brilliant Mississippi minds unite with positive vibes as Dear Silas and Big K.R.I.T. team for “I Got It”, produced by Luke Sampson and Walter Newell. This track is available now on all digital platforms, and a Dark Brothers-directed visual will premiere this month.

“The song kinda came out of nowhere,” Dear Silas explains. “My manager sent it over and Krit liked it so much, he sent back a verse immediately. I canceled a trip and shot the official video on my birthday! This record was born from me feeling down and thinking I hadn’t progressed enough in my life, but listening to the track more and more made me feel empowered like, ‘I can really do this’. I want to encourage people who feel like giving up”

Dear Silas experienced success with his 2018 hit single “Skrr Skrr”, and released visuals from his album The Last Cherry Blossom throughout 2019. In the new year, the multi-talented musician, songwriter and visual artist will be revealing fresh sounds from his upcoming project, with more shows and more exciting adventures to be announced.

It seems like Skies himself wants you to focus on the sound and energy of his music, rather than look...